In the early nineties, there was a recession, that would cause me to get laid off from my job as a home builder in the prefabricated contemporary homes industry. During this time, a friend of the family, had experienced the loss of both parents, all within months of each other. At this time, I was contemplating going back to school, or learning something new at least. The person whose parents just died, asked if we (meaning my wife at that time, and myself), would like to move into that house, and rent out our existing house, as a way to conserve funds while I figured out my next career steps. We both agreed, that this would be a great idea to pursue while we figured out my next steps.

In this house, all of the furniture was still there, including food left in the freezer, and on the shelves going down into the basement. There were still dishes in the cabinets, pictures of the family in the main living room etc. It was a little bit weird at first, to step into this home with all of the furnishings still there, as well as the ashes of the people in the living room as well. The home had this vibe, like the people would arrive back there at any moment. My job as caretaker in the meantime, was to take care of the property; general landscaping, maintenance of the home etc. I would even at times, babysit the woman’s dog (the woman who inherited the home). I was at this time, studying exercise science, to become a fitness trainer, which I did accomplish, and was hired as a trainer during this time, as well as starting my own private business as well. 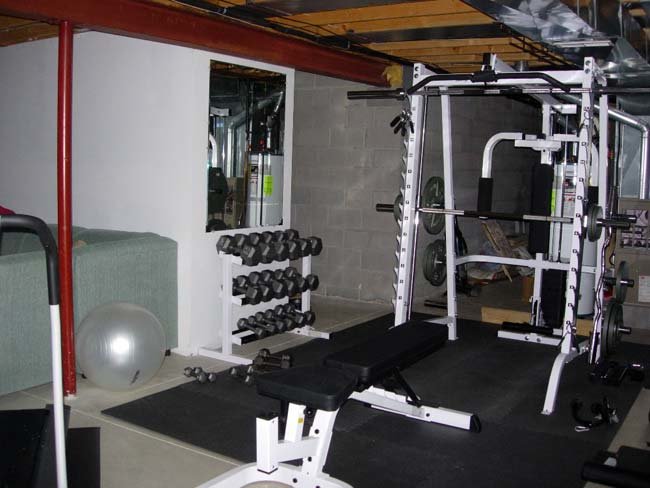 With this new education, I was readying the home to take on clients at home eventually, and had setup my exercise equipment in the basement. This was all just before the winter, and I was thinking to myself how best to keep things warm down there. The home had a variety of utilities required to run everything. The home was an older ranch style home, which was kind of sprawled out and elongated, with an additional family room off of the right-hand side. The main living room (front middle), was where the sort of shrine to the owners was, and it looked like one of those rooms that was seldom used, as the furniture in that room looked like it was barely used. The “add on room” on the right-hand side of the house (when facing it), was where all of the TV and recreation time was always taking place. Behind the main living room, was the kitchen, and between the two at the end of the hall was the basement door leading down to the basement.

Too many utilities to manage 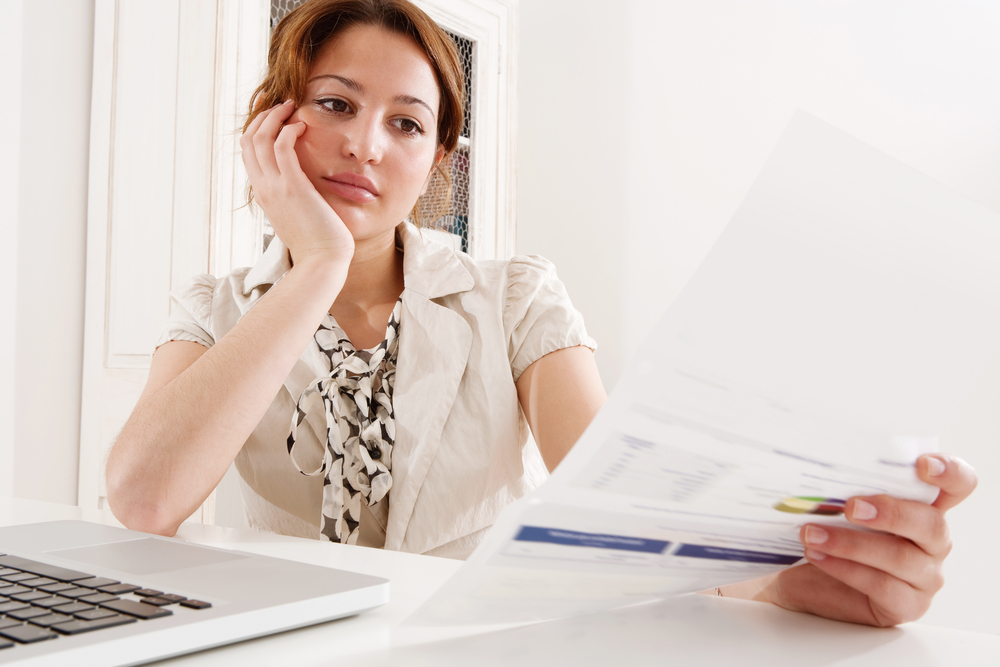 So, what that meant for utilities, was that we had all electric baseboards in the TV room, and in the other living room no one used, was a fireplace. The general furnace was an oil furnace, which could heat most of the rest of the home, but we ended up using the fireplace like the original owners did, to try to keep the utility bills down, since I was still getting back on my feet after about 8 months or so in that house (during this time I was educating myself on my new career). And to add another utility bill; the water heater ran on gas. So, we had to buy wood, pay for oil, gas and electric, and try to balance it all financially. Also, luckily in the basement, there was another wood stove, that the owner used to heat his workshop. The owner was a finish carpenter, and a very good one from what I could tell, and from what others had told me at that time.

I realized I could use the wood stove to help heat the basement, since it also helped to keep the rest of the house warm, and it also seemed to provide good heat for my own needs down there. I started to use this regularly, especially on those really cold nights. The current owner of the home, had mentioned that her parents used it to help heat the home in general, since heat rises. She said that the heat would flow up into the living space, to help keep things warm, without having to spend a lot on other utilities.

I always felt like they would come home some day

Even to this day, I still dream about this house. In my dreams, I’m in the same home living there… having this exact same feeling as when I lived there; that the owners are going to come home at any moment. Even though I never actually met the prior owners, I always felt like they were still living there, because of all of their personal property still being there, and with us actually using everything in the home while we lived there. It just still had the vibration of their spirit there, even though we logically knew they were not still living there. We did ask the owner if she could move the stuff out of the home into storage (to make it feel more like our own living space), but she preferred that she just keep It there for a while, since she didn’t want to spend extra money on storage.

Visualizing the layout of the home

So, to visualize where things were, if you were looking at the front of the house, there were two bedrooms on the left-hand side, and both were across from each other. One in the back (the master bedroom), and one in the front of the house (the second largest bedroom). The room next the bedroom in the front (just to the right of it), was the bathroom. The third bedroom was across from the bathroom, and only sufficed as a very small office. The windows were really not great, something like the windows in the picture below; but even more restrictive should someone actually need to egress from the home or something like that. Also, not much light could ever enter those windows at all, which made it quite dark in that side of the house. Only on the exact opposite side of the house, were there windows that were large enough to let in some good light. This was where the TV room was. We kept the doors shut in all of the other rooms, including the bathroom, to keep most of the heat entering our bedroom, especially since we were running the wood stove in the basement every night for most of the heat.

It was a very cold night 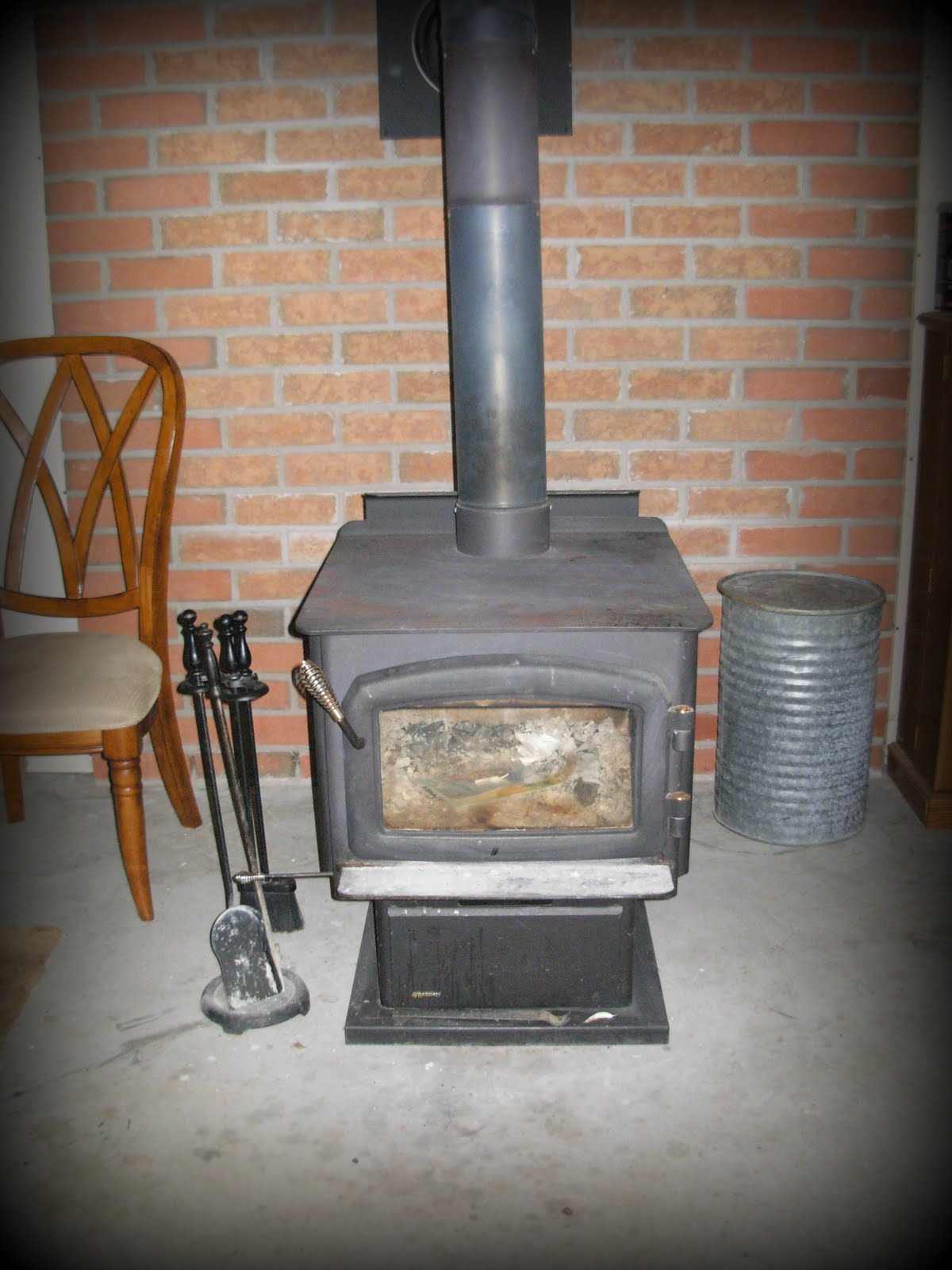 It was a very cold night that night, and we had been running both the fireplace upstairs, and the stove in the basement for heating the entire house. I waited up until the fire in the living room went out as I always did before going to bed. We had the glass shatter once in the living room, due to overheating it, which made us extra cautious about the upstairs fireplace. Anyway, that night I put some extra wood in the basement stove and then headed off to bed. I quickly fell asleep that night. After some time, we were both reawakened by a brilliant amber light in the hallway. It was a fairly bright amber light, and I immediately thought that the fireplace upstairs had kicked back up somehow, and the house might be on fire or something. So, I jumped out of bed, with this light in the hallway. I was sort of scared at this point, since all of the room doors were closed, and there was no way any kind of light should be on in that hallway. 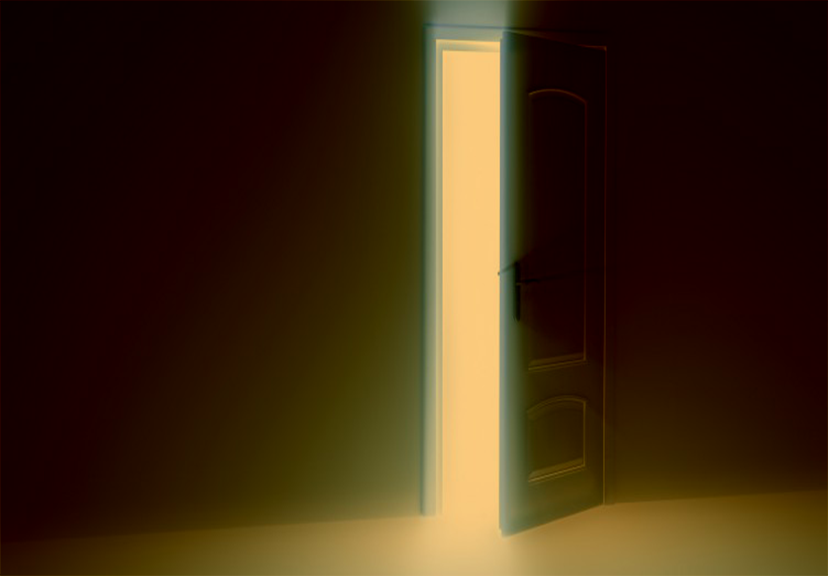 I followed it down the hallway 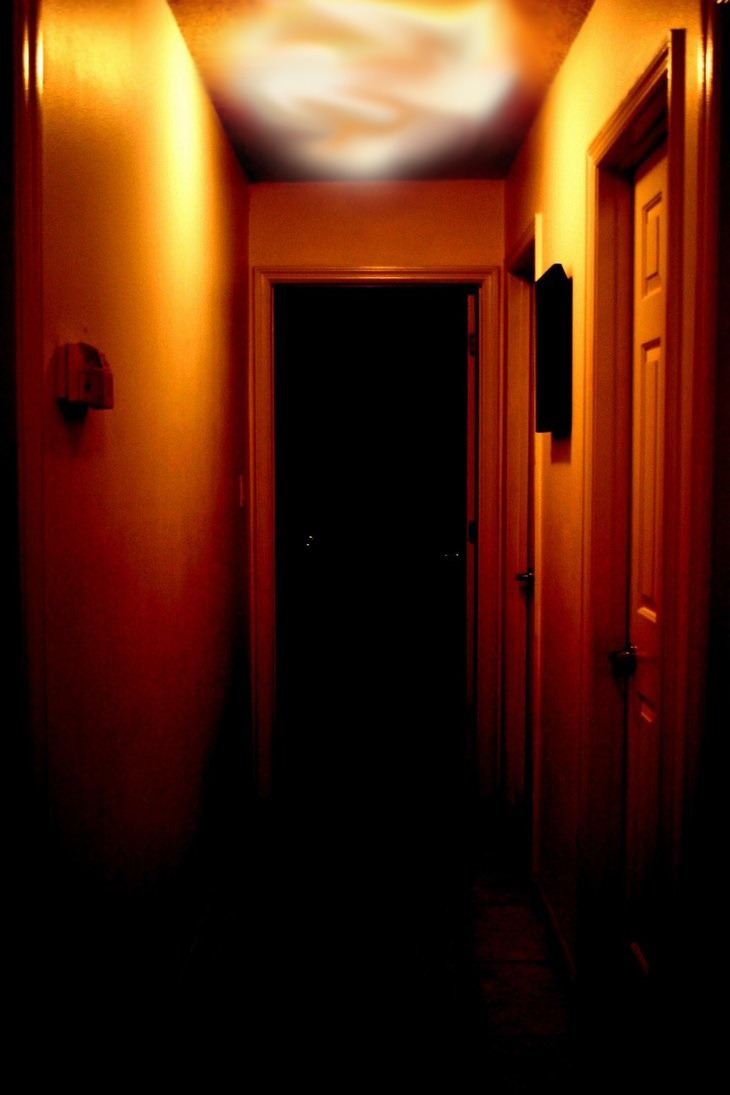 I got my pants on in record time and began my way down the hall… when the light suddenly started to move slowly down the hallway towards the basement door. I had an instinct to follow this light, as it seemed like it was guiding me somewhere. I opened the basement door and switched on the light, and the amber light above me just seemed to vanish. I went down into the basement, and the pipes on the stove were glowing such bright red (like the pictures below [more like the brighter one]), and I was so fearful that they would catch on fire at any time. I tried to grab the damper but it was way too hot, so I grabbed a work glove and fiddled with the damper, until I got the pipes cooled down. My wife ran to the top of the stairs yelling down, “what was that light, and why are you down the basement?” I said to her, “I cannot explain the light, but the stove was almost catching on fire, and I had to adjust the damper to cool it down.” She then ran back to bed at this point. 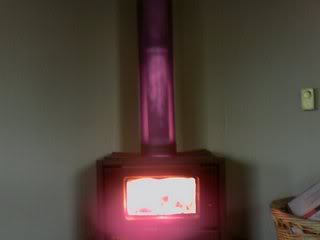 It was more like this color actually, and the entire pipe pretty much leading up to the insert into the chimney. 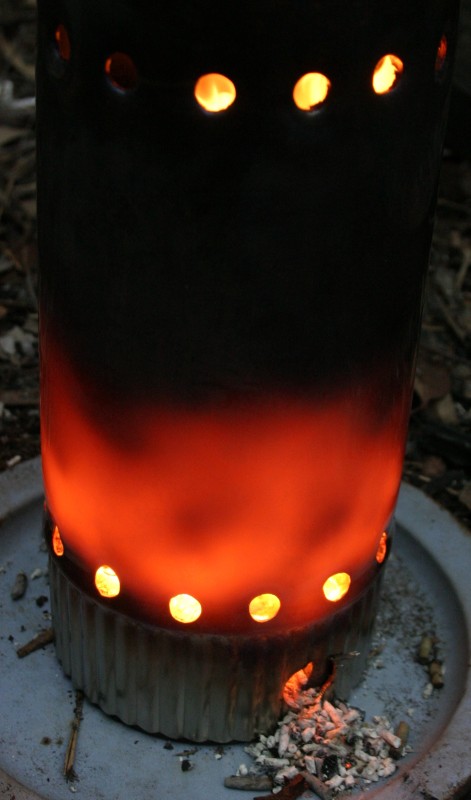 While I was sitting there waiting for things to cool down, It dawned on me; the story my relative told me about what she thought was a spirit visitation. In her experience I described in part two of my personal stories, she described the light as an amber glowing light. Immediately I remembered that story, as well as my own similar stories relative to that kind of light. I said to myself–It must’ve been the prior owners of the house protecting us… and their home from burning down.” I’m convinced, that we could’ve died that night… had we not both been woken up by this bright amber light in the hallway.

So, at this point I go back upstairs, and couldn’t even see down the hallway, it was so dark. So, whatever it was lit my way, and guided me directly to the basement door, where I found this emergency situation in progress. I thanked God/Source that we didn’t die that night, as our lives would’ve been cut very short-since we were only about 27 years old at that time. As you can see from the pictures of the windows below, there is no way we could’ve exited those windows, as they were both too narrow (narrower even than the pictures), and they were sliders that didn’t allow for enough room even if we broke out the glass. 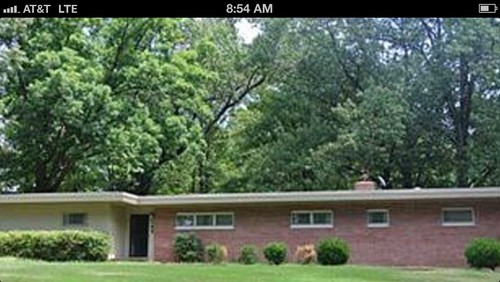 Thank you to whatever spirit or angel came to our rescue that day, but I believe it was the owners looking over us that day, as I suspect they did for the entire time we lived there in that house.

From this point on, my life took on new meaning, and these kinds of incidents would be the things I would turn to whenever I had doubts about my own life’s purpose. I have built my faith around these experiences, and I know it helps me to stay grounded each and every day of my life.